4:30. I hope someday to start one of these posts without first listing the painful time the toddler awoke and demanded 1. Attention 2. Water 3. “Ami watch Daniel Tiger” 4. “Ami eat”, or 5. Tawbeddies (strawberries).

Anyway. We left the house just before 7 and took a mostly empty train to Ginza, where we stopped at Mos Cafe for a coffee for us and a strawberry and condensed milk smoothie for Ami.

(Boogie Boards, by the way – awesome for travel with a toddler who loves to draw.)

Then, we walked through the entirely closed Ginza neighborhood (It’s a bustling shopping district usually, but not at 8:30 on a Sunday morning) heading for the Imperial Palace. 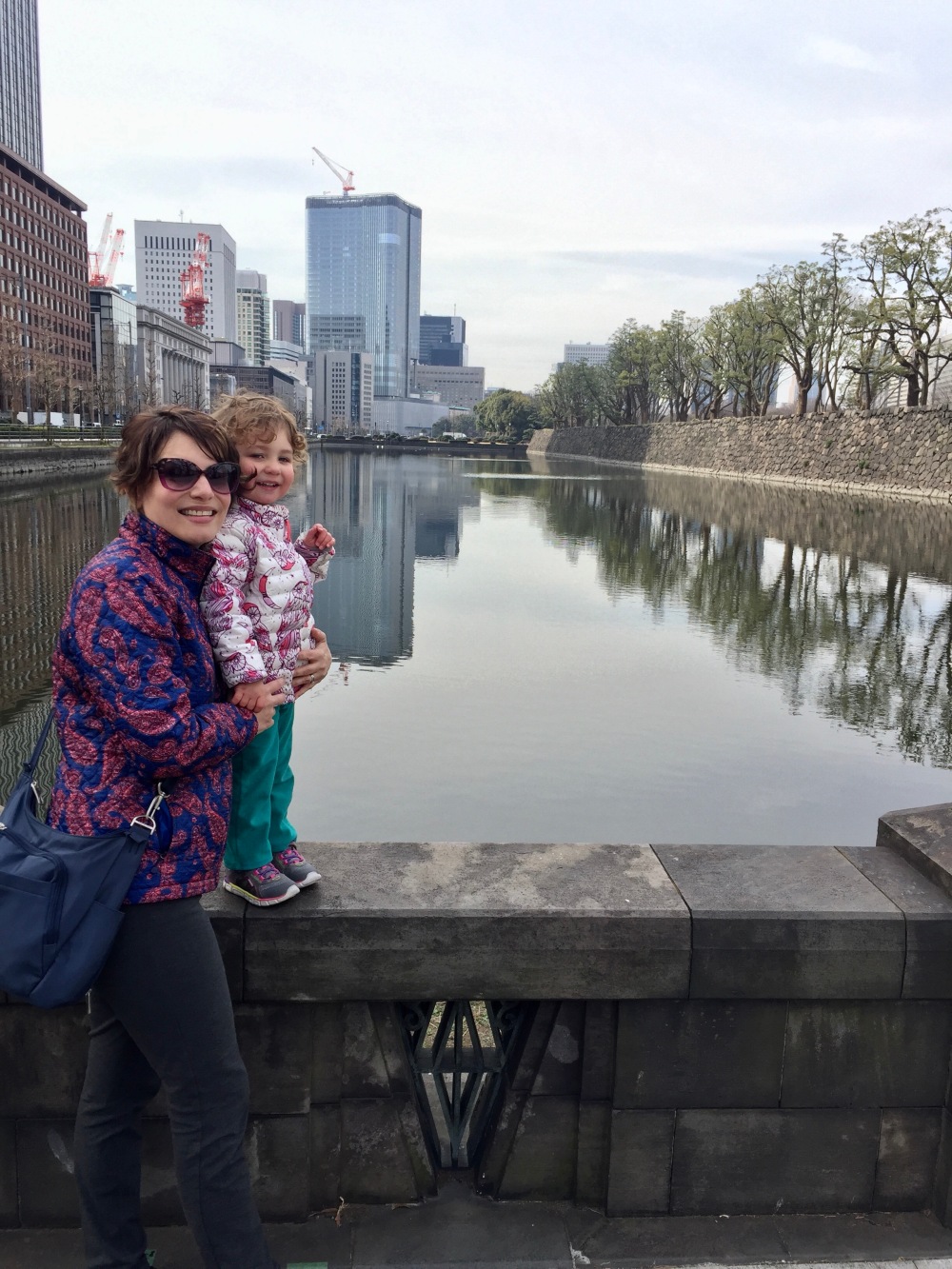 Oddly, there were a bunch of running groups making laps around the outside of the Imperial Palace grounds this morning. We even passed people wearing vests that said “Staff” and holding signs with distances printed on them. Since we didn’t know what was going on, I can only assume we won whatever race was happening. Or not happening.

The gardens at the Imperial Palace were gorgeous, and the fortifications that remain are most impressive. We were reminded of the stonework in Cuzco.

Add this to the list of “castles I would prefer not to storm.” 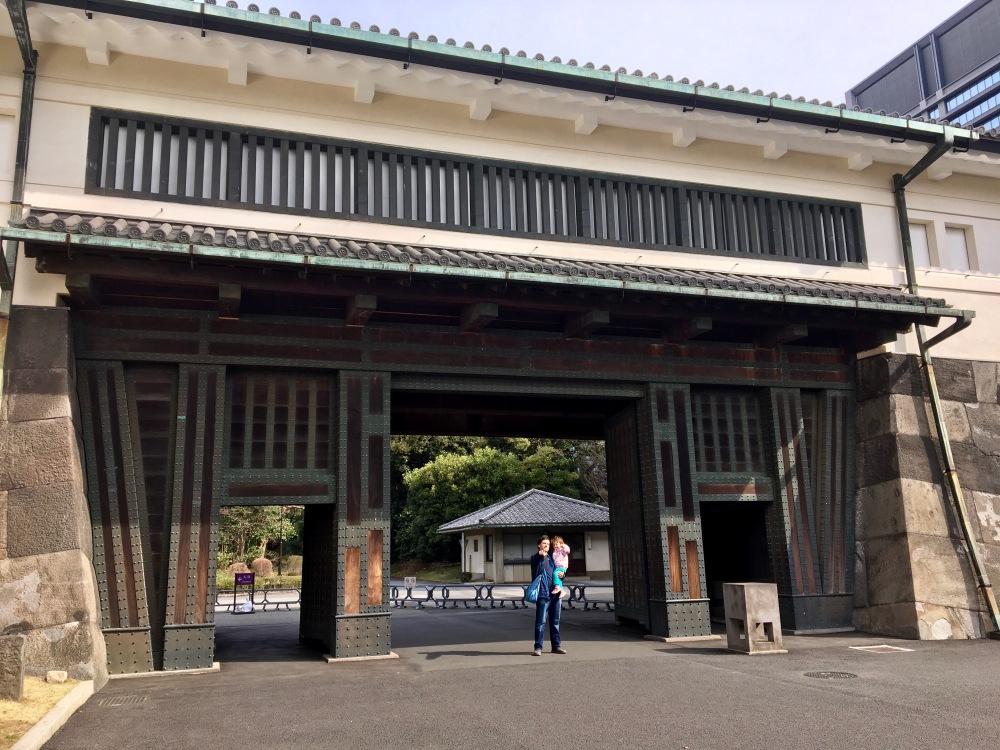 We enjoyed exploring the grounds for an hour or so. Some of the fruit trees are even beginning to bloom! This is a Taiwan Cherry, and it matches Ami’s stroller.

The Sakura cherry blossom trees are really just beginning, but there was a stunning example just outside the palace grounds. 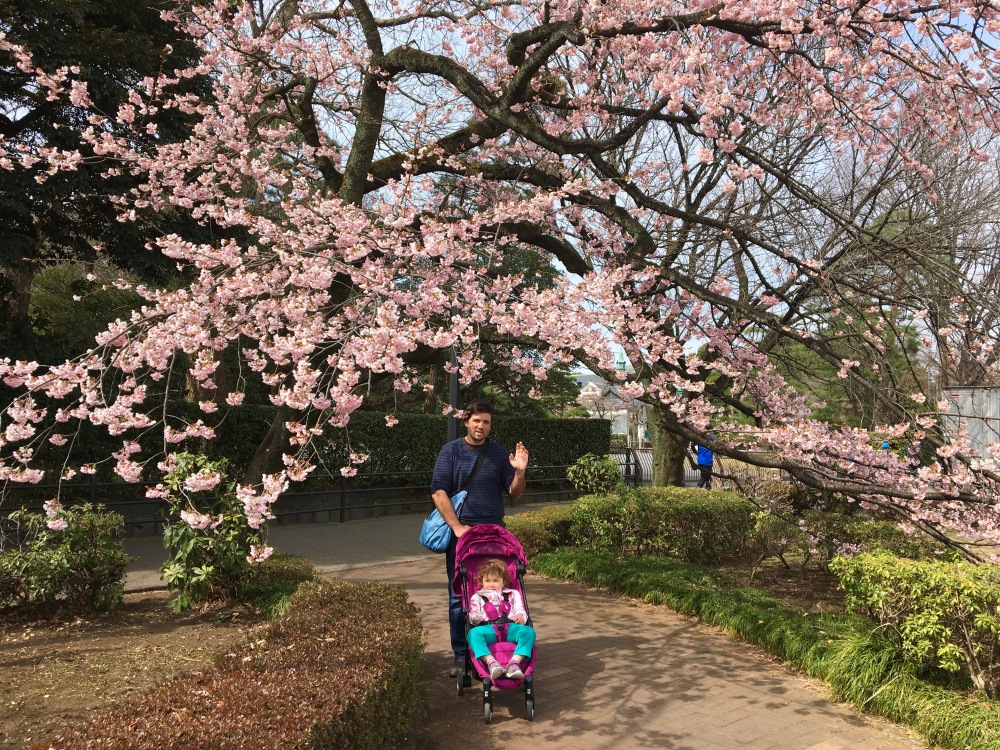 We left the grounds and walked through Kitanomaru Park heading for an eel restaurant we hoped would be open on a Sunday. Midway through the park, we ran across a huge media event for The iDolm@ster, which we’ve never heard of but which is apparently a gigantic juggernaut of a video game, that has spawned a Korean drama, music, and a rabid following made up almost entirely of men from what we could see. The lines to buy merch were blocks long. 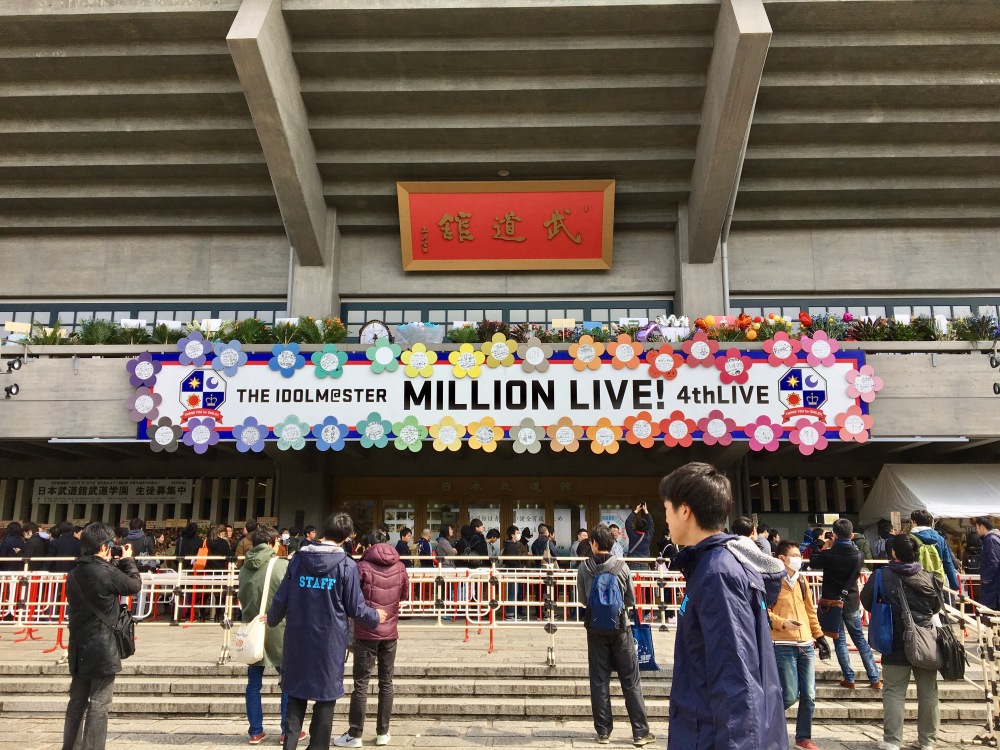 Unfortunately, the eel restaurant was closed, but the walk through the park was enjoyable. We backtracked a bit to a place we’d passed that looked like they could do a good lunch and which was most importantly open.

This place (um, I’m not sure what it’s called) was super friendly. They didn’t have an English menu, but one of the waiters offered to help us, and between him and the Google translate app we were well taken care of.

And a set lunch with salmon baked with soy sauce, tamago omelette, tofu, pickles, and soup. 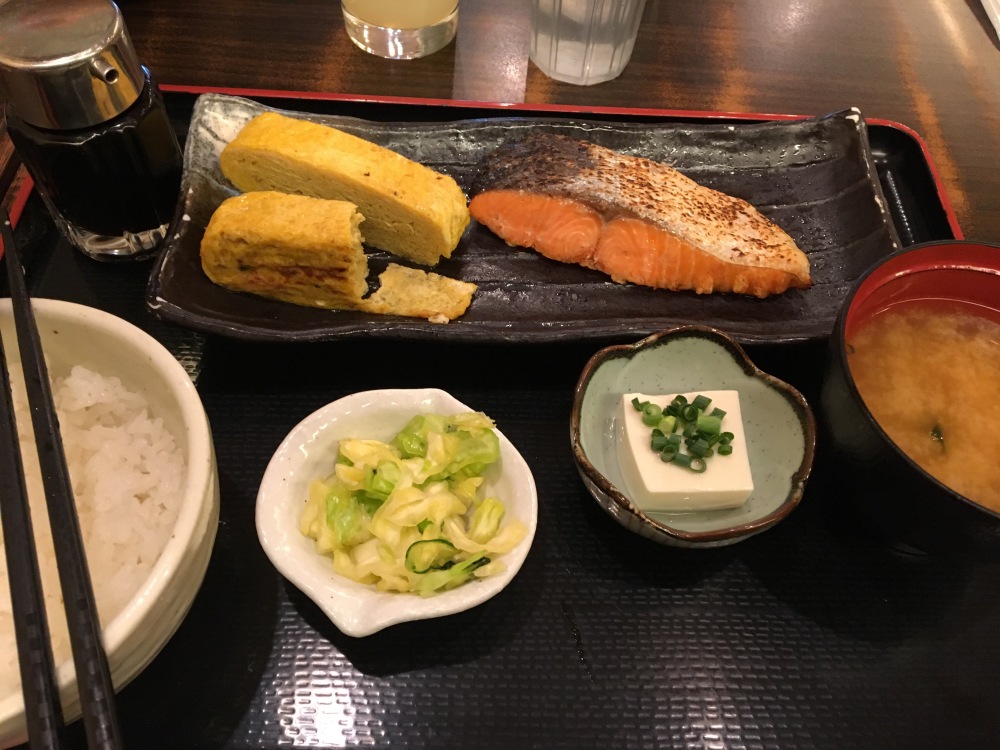 The restaurant reminded me of a Japanese version of an American Italian red-sauce restaurant, if that makes sense. The walls were decorated with nostalgic metal signs and pictures, and the menu was total Japanese-style comfort food. We really enjoyed our lunches (though I made the mistake of giving Ami the phone to watch Dinosaur Train before the food arrived, and when it came she had NO interest in it at all. Lesson learned.)

After lunch, we made our way back to our apartment for a nap. At the metro station on the way home, a young impeccaby dressed woman with expensive-looking hair reached down and rubbed one of Ami’s curls between her fingers, cooing “kawaii” (cute) at her, which was weird. Ami handled it well.

These blue nets are all over our neighborhood. On trash pickup days, people put their bags of trash underneath. I read that the netting is to keep out the crows, which are everywhere in Tokyo. Ami’s already learned to mimic their caw when she sees them.

Nap was three hours, and afterwards we played around the house, waiting for Jody and Tori to arrive from the airport! (Woohoo!) They got here just after 8, after a long journey from the airport, and we headed to a neighborhood ramen joint Logan scoped out several nights ago. 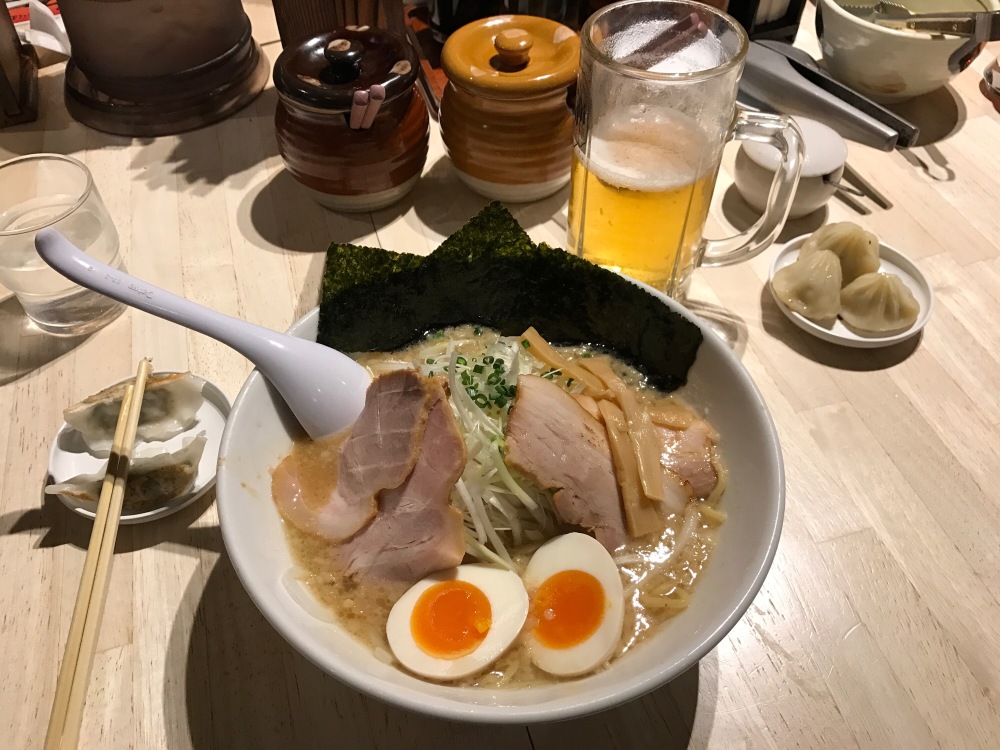 The ramen was excellent, the beer was plentiful, and it was so great to see those guys! I can’t believe we’ve all made it to Tokyo! 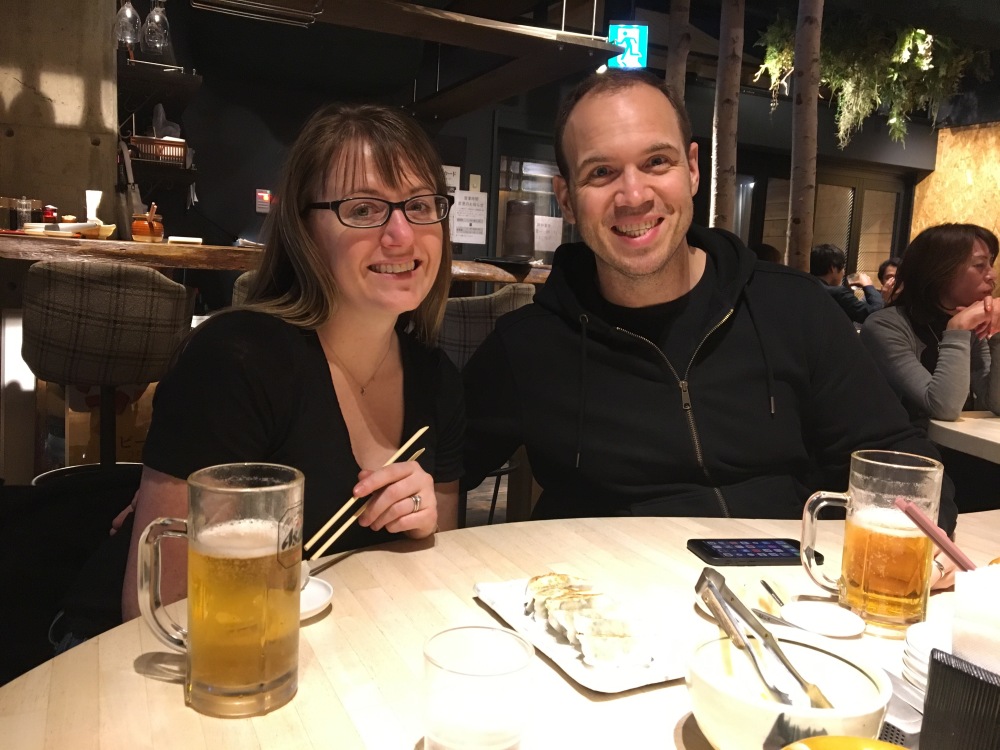 Plan for the morning: oh god, Ami, PLEASE PLEASE sleep past 5. See how everyone’s jet lag is treating them, and then head to Tsukiji to find us some fish!