5:45! I feel like this is a victory! Of course, Jody and Tori were up way earlier than that, due to jet lag.

And back to Tsukiji for sushi breakfast!

After eyeballing the lines for the famed Sushi Dai and Daiwa, and realizing that there was no way we were going to wait in line 5 hours for sushi, we went to Sushi Yamazaki, which is on the same alley as its two more famed brethren. The place is tiny, seating, er… 12? Including one toddler, of course.

The four of us ordered omakase-style, which was 4000 yen each (about $36) and proceeded to have some seriously terrific sushi. (Ami had a bowl of rice and some snacks.)

Each individual piece of sushi tasted like the prototype on which all other sushi was based. The squid was perfectly squid, topped with yuzu salt. The conger eel came with two flavors, one salted and one with eel sauce, which was the lightest and most flavorful version of that sauce I’d ever tried. The jack mackerel was so fresh and so tender.

And then there was the tiger shrimp… still twitching, with its fried head served afterwards.

​​
When Ami showed interest in the salmon roe we’d been served, we ordered her a piece. The sushi chef split one order into little bite-sized pieces for her. 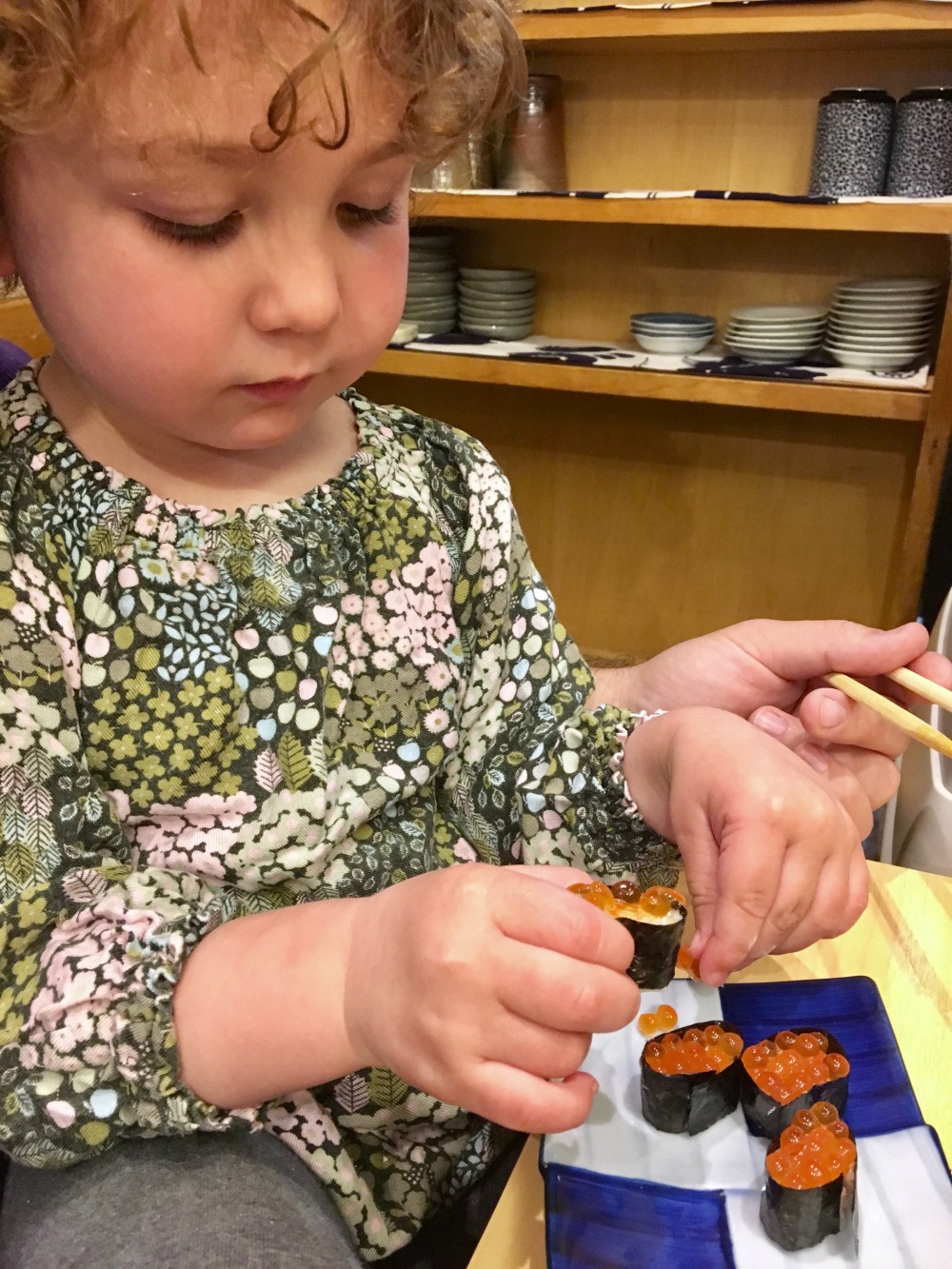 People have been so friendly and excited and sweet to Ami! It’s really endearing.

After breakfast, we grabbed a cup of coffee and made our way over to the giant wholesale market, which we’d heard opened to the public at 9.

…and we were unceremoniously chased away from the market and literally down the block by a gentleman in waders sporting a giant sign stating that no tourists were allowed prior to 10:00 AM. Ok.

We checked out some more of the outer market area, oohing and aahing and pointing out glorious vegetables and seafood, 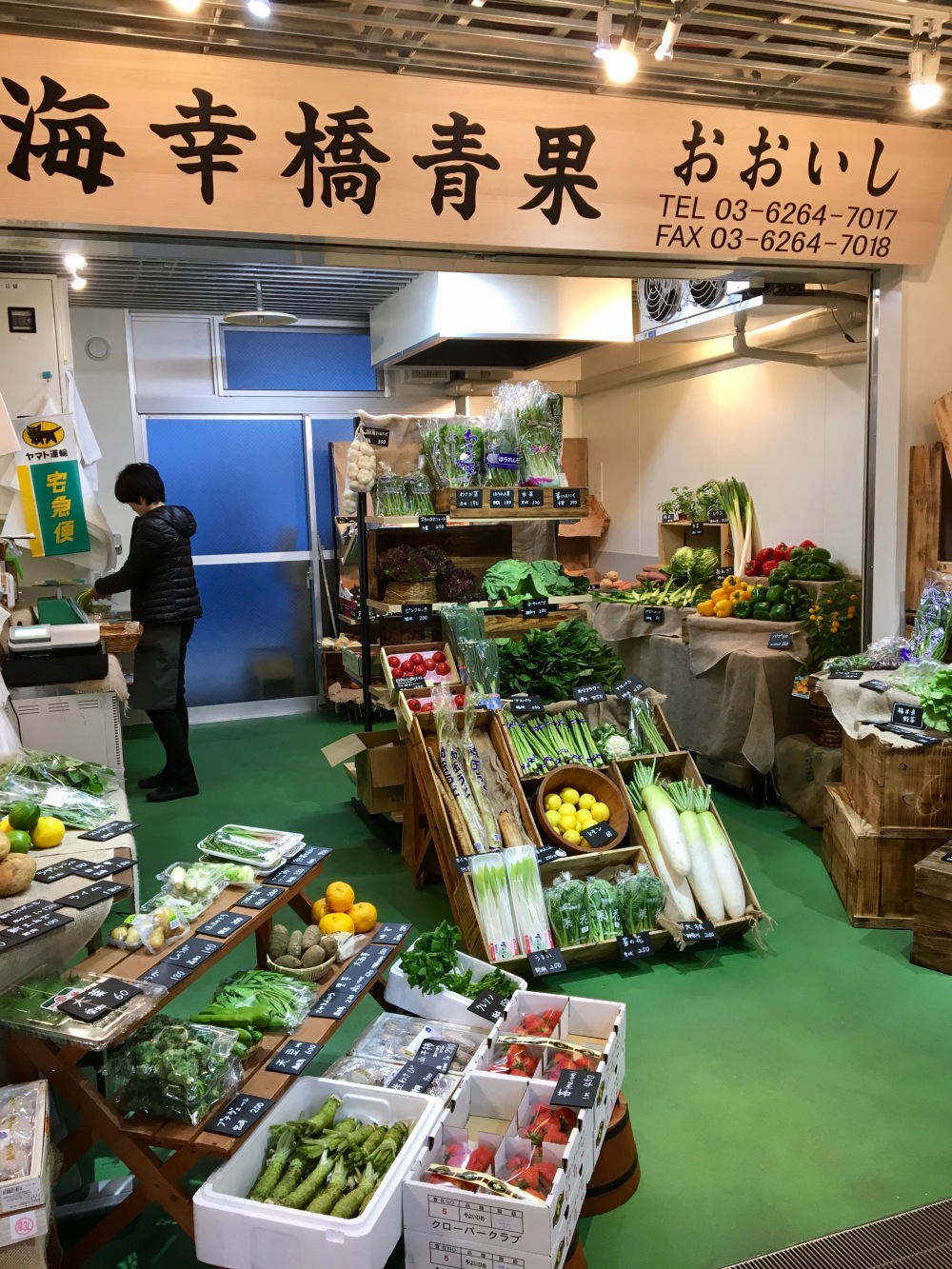 And making friends with some of the wares.

At 10, we re-presented ourselves at the inner market and were finally allowed inside. I immediately saw why they don’t want tourists in there earlier. The lanes between stalls were tiny and crowded. Men pushing handcarts stomped past, and small trucks went by at pretty high rates of speed. We were definitely in the way, which is not a feeling I enjoy.

We did get to see a few giant tuna being broken down, as well as cooler after cooler of the freshest, most varied seafood I’d ever seen.

After a while, Tori, Ami and I bowed out to go somewhere not quite as crowded. Logan and Jody stayed behind to do more exploring.

When they were done, we headed to an amazing knife store where Logan picked up an incredible souvenir (it was a knife!). Jody and Tori went off to walk the streets of Tokyo while Logan, Ami, and I headed back to the apartment to rest up for a bit.

Logan found some onigiri rice balls to bring home for a light lunch and snacks. Ami was a big fan of the miso-grilled one, which appeared to have been filled with Laughing Cow cheese. Maybe?

On the way home, we had a toddler face off on the train.

Ami did NOT want to go to sleep today at naptime, which, frustrating as it was, is maybe a good sign that her internal clock is starting to right itself a bit? Always look on the bright side… Anyway, she eventually gave up and went to sleep for 90 minutes or so.

Jody and Tori returned to the apartment just as we were getting up from our nap, and we all headed out again to Shinjuku.

Our primary destination was a small red light district, with a few hostess bars, pachinko parlors, and, er, houses of ill repute. Nothing was very overt, and we totally saw several other toddlers there, but yup – it was interesting taking a toddler to a red light district! (It was also about 6:30 PM, so things were pretty tame.)

Shinjuku itself was fascinating and frenetic, a whirl of neon and people. It definitely looked like my preconceived notion of Tokyo. 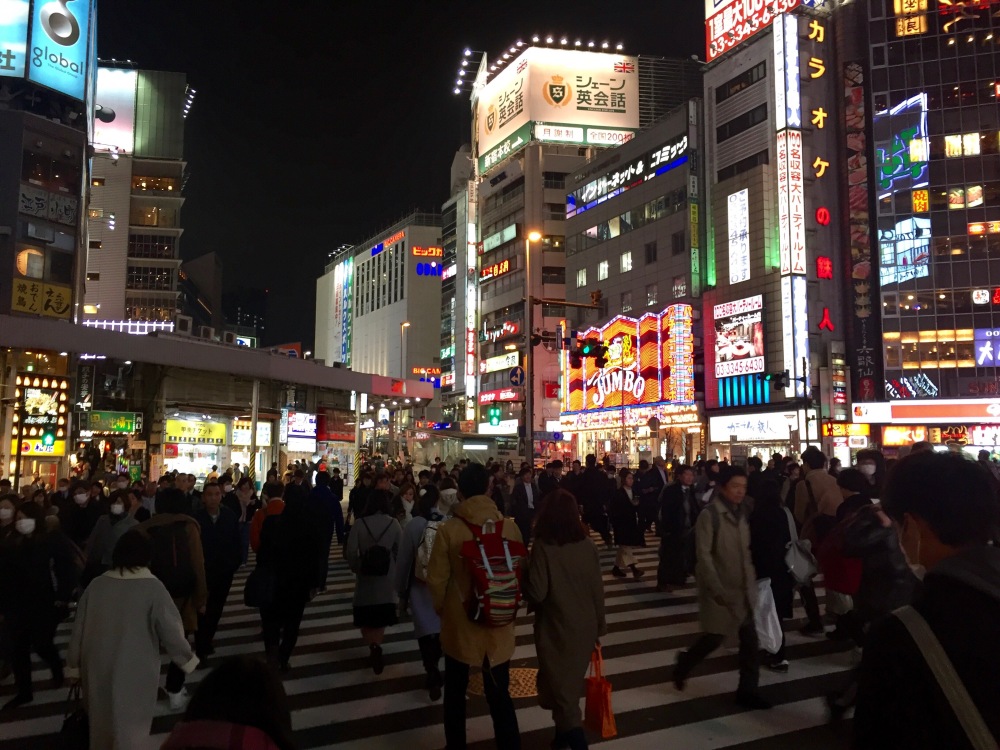 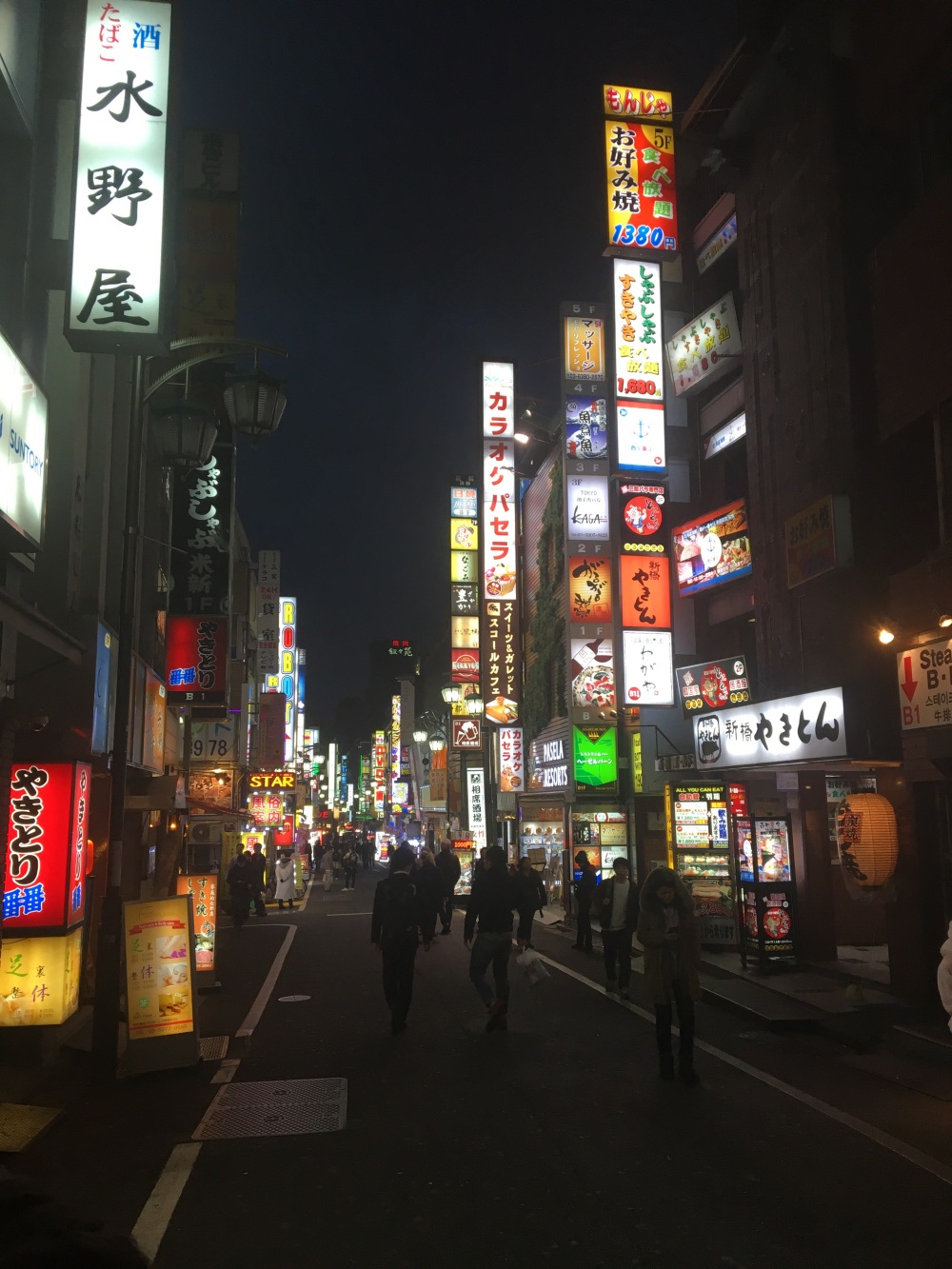 Our secondary destination was the evocatively named Piss Alley, which is also called Memory Lane. It smelled not at all of pee, not to worry. Instead, it’s a narrow lane of yakitori joints, restaurants that serve grilled meats and vegetables cooked on skewers over charcoal. 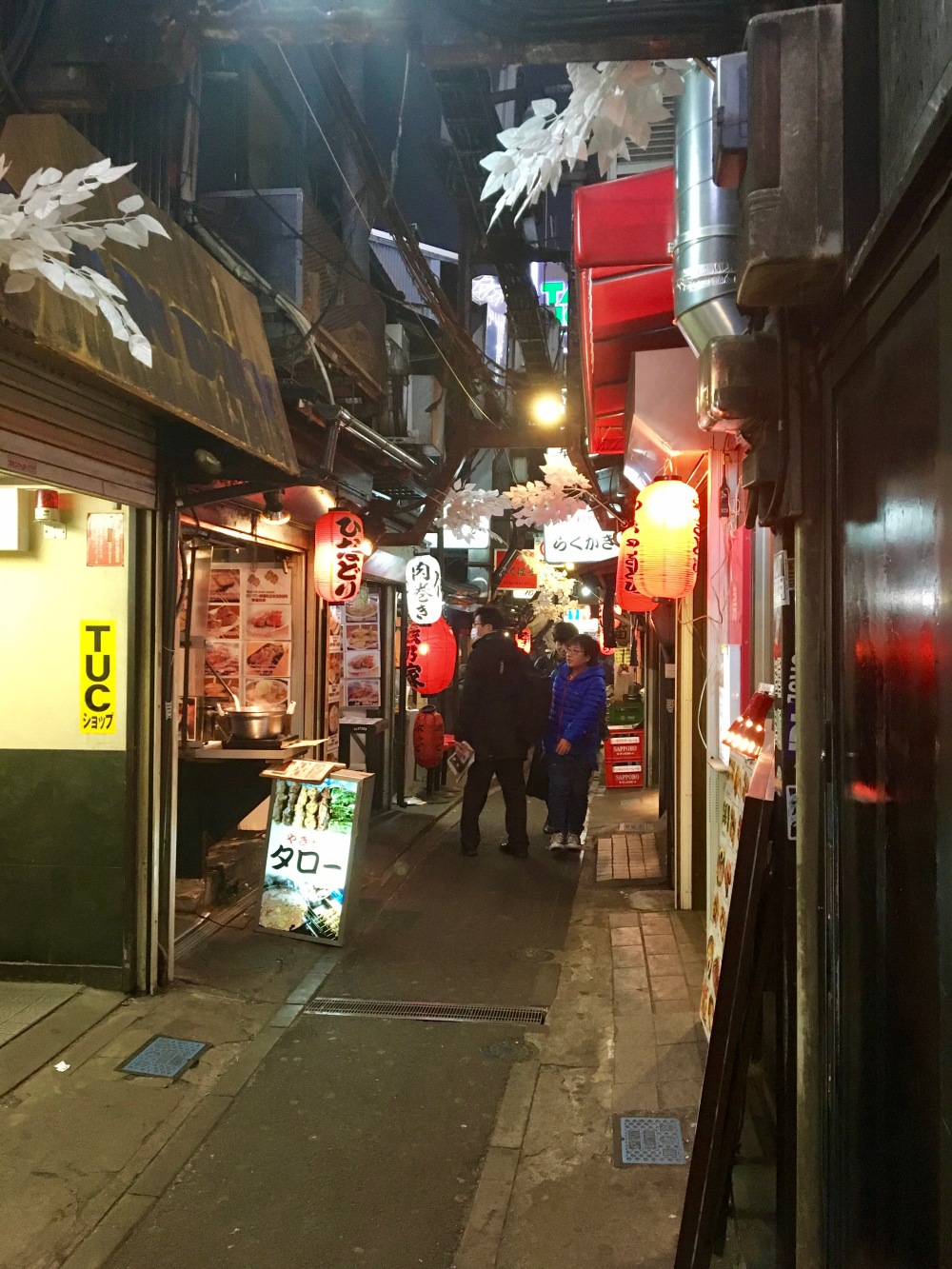 Like the sushi places at Tsukiji, many of these restaurants can only seat a few customers at a time. We were fortunate to find a friendly place that had room for the five of us. (Though Ami is small, she does still take up a chair.)

We ordered grilled pork heart and beef tongue, oysters and chicken meatballs, skate fin and chicken wings. The place even did a lovely mackerel tartare, served with the fish carcass, that was later fried and served like a crispy chip. 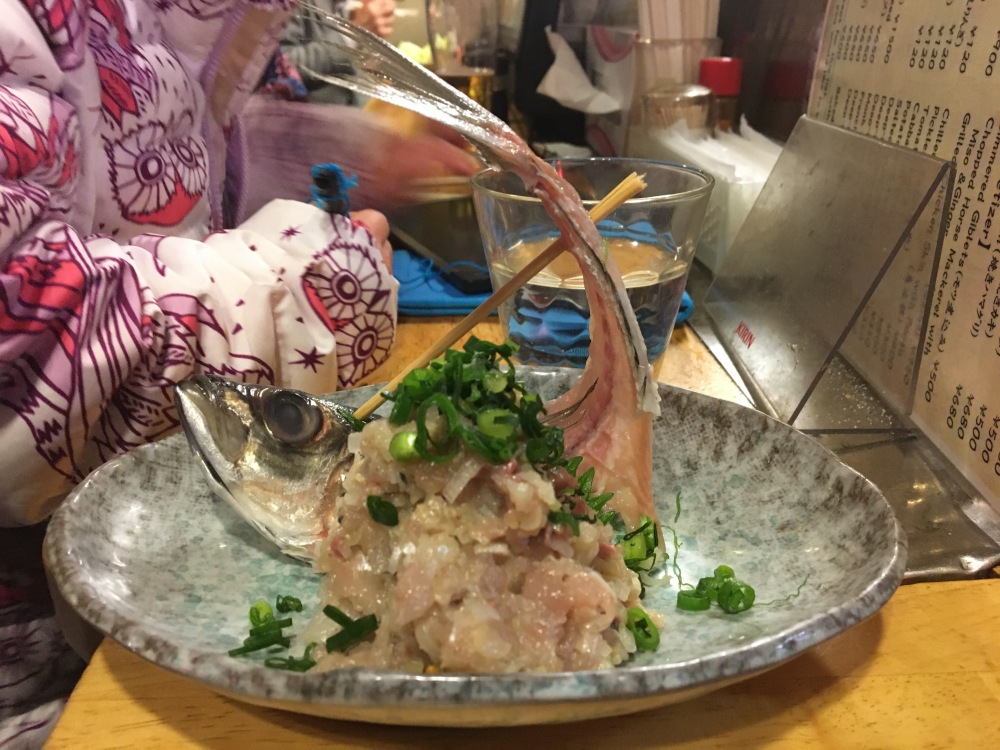 The grill was tiny, and was kept in constant use.

Since the place was so small, Jody and Tori were basically sitting with their backs in the alleyway. Therefore, when a drunk man stumbled and fell through a sliding glass door across the way, it happened feet from them. Thank your chosen deity the guy was not too much the worse for wear, because the glass panel completely shattered. It could have been a LOT worse, but he appeared to only have a small cut on the back of his head. The police showed up promptly, and as we were leaving a medical team arrived with a stretcher – though I honestly think they sent the medical team because the guy was clearly too drunk to care for himself.

Another drunk gentleman saw Ami quietly perched on her stool, eating her fries, and offered her a giant bag of a Japanese sweet that tastes like donut holes dipped in brown sugar! Jody had some New York keychains handy, and gave the guy one – he got a huge kick out of that.

Right after this happened, the restaurant gave Ami a dish of chocolate covered almonds. I swear, it’s like we’re traveling with a celebrity. 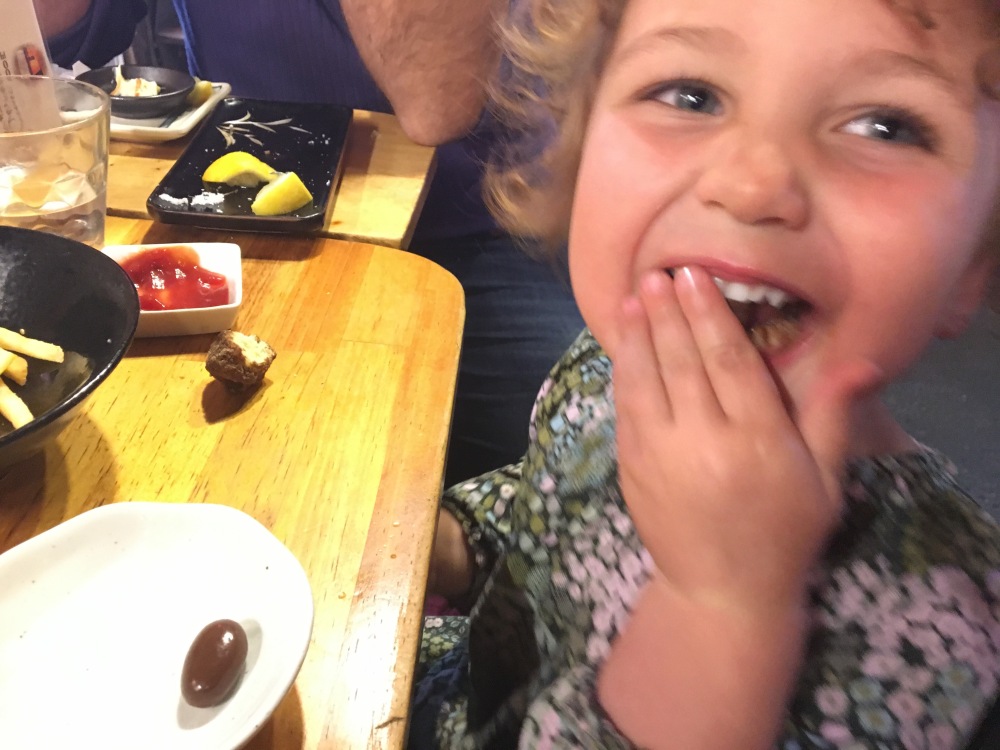 After dinner, we made our way through the very busy Shinjuku Station and back to our house. What a great day!