I’m so glad Iron Butt is finally going to be showing in our local cineplex. (Don’t correct me.)

Today, we took the kintetsu line from Nara to Kyoto, changed there for the Shinkansen, and then changed again for the Hida Wide View train, a fancy sightseeing train with yoooge windows and occasional canned (and welcome) commentary on the beautiful scenery that flashes past the windows.

The trains were quite heated on a cold day (we’ve found that most indoor spaces are kept very warm this time of year).

I broke out some Target dollar bin gel stickers I’d picked up before our trip, and they were a big hit! 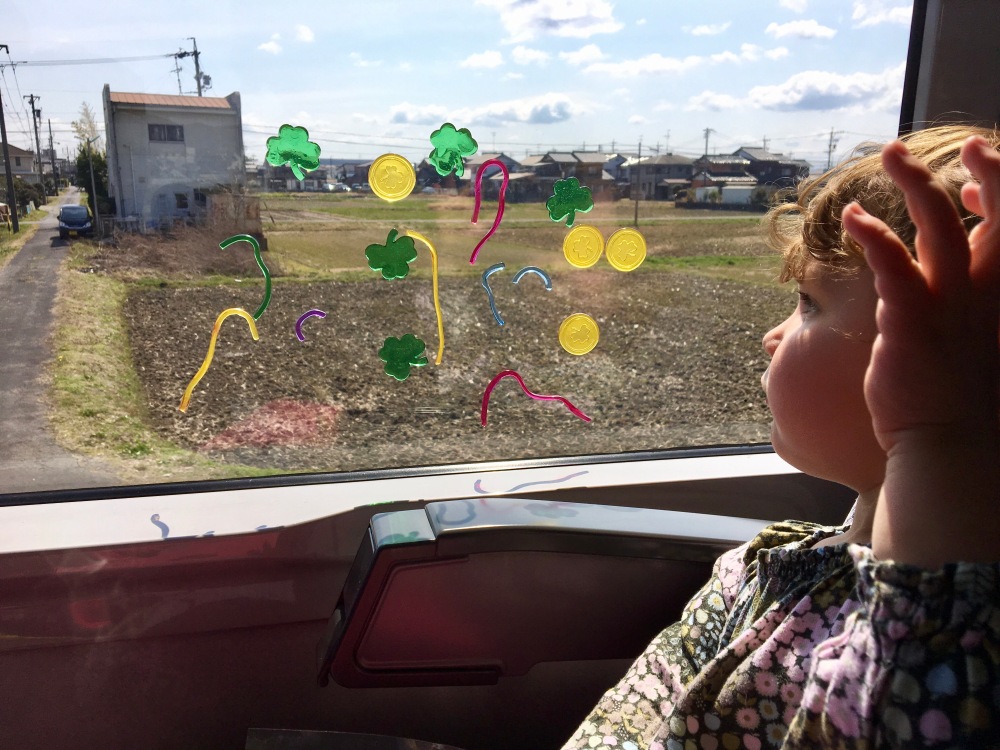 Our Hida Wide View got us into Takayama just after 3 this afternoon. It’s considerably colder here, and the town is much smaller than anywhere we’ve been, so things shut down early! We left to explore a bit as shops were closing.

We saw a lot of these monkey/acrobat looking figures that it turns out are called sarubobo. They’re everywhere! They’re faceless figurines with pointed arms and legs, and they are sold and referenced all over town. Here’s Logan posing as one. 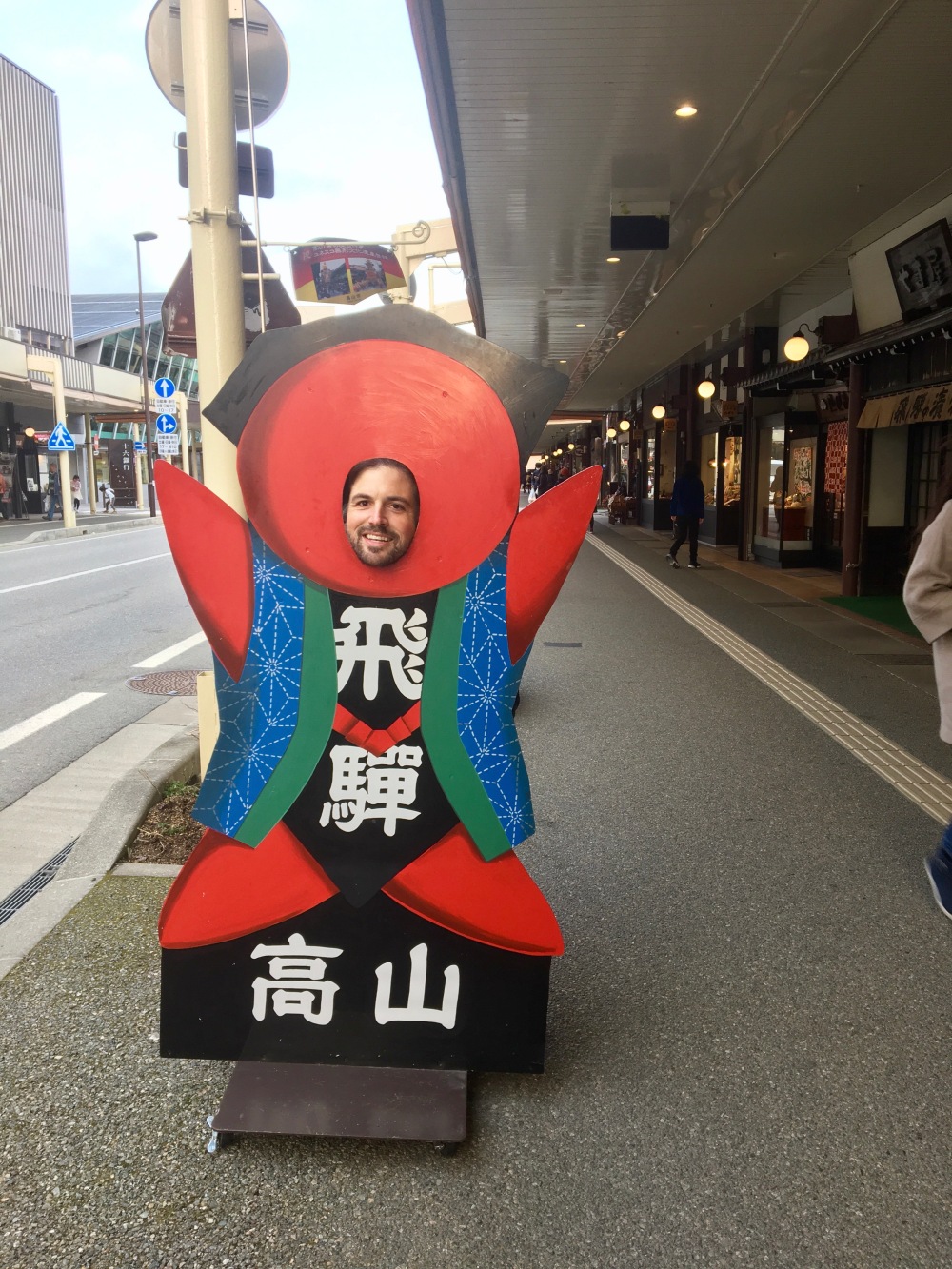 At one point while we were out sightseeing, Ami took off at a run, tripped, and skinned her middle finger pretty badly on the rough concrete. It bled and looked really painful. Logan took off to find some bandages while I sat with her while she cried. Poor thing was really upset. I was worried for a bit that she’d done some real damage to her hand, but I think she just banged it up a bit. She’s usually pretty stoic when she falls down, so I know this must have really hurt!

After that, I put her in the carrier for a bit so she could be close to me. She seemed to like that. Plus, the temperature was dropping fast! We are up in the mountains here, and there’s actually still a bit of snow on the ground in places. And the brand new deer hat we bought her in Nara to replace the lost hat we brought from home somehow went missing on our journey today… sigh.

We stopped in for dinner at a restaurant called Kyoya. It’s very much on the beaten tourist path, so when we got there at 6:10 they told us they were booked for the evening. We said we were happy to stick around for a bit, and 15 minutes or so later we were led to our own tatami room!

I hope we made it worth their while – we ordered a huge spread of food! This area is famed for its Hida beef, so we got a dinner set that included the beef and some vegetables that you cook yourself on a stone. That set also included rice topped with a bit of shredded beef cooked in ginger, as well as a bowl of miso soup, and a well-known dish in this part of the country called hoba miso. Hoba miso is comprised of green onions, Hida beef, and mushrooms, set atop a generous dollop of local miso and cooked on a magnolia leaf on a grill set over an open flame. Cool, huh?

We also tried soba (buckwheat) noodles in a hot soup, served with grated mountain yam and a quail egg, with a side of simmered mountain vegetables. Everything was very good, and it was fun to try a spread of local foods! Ami was a big hit with the servers, too. Say cheese! 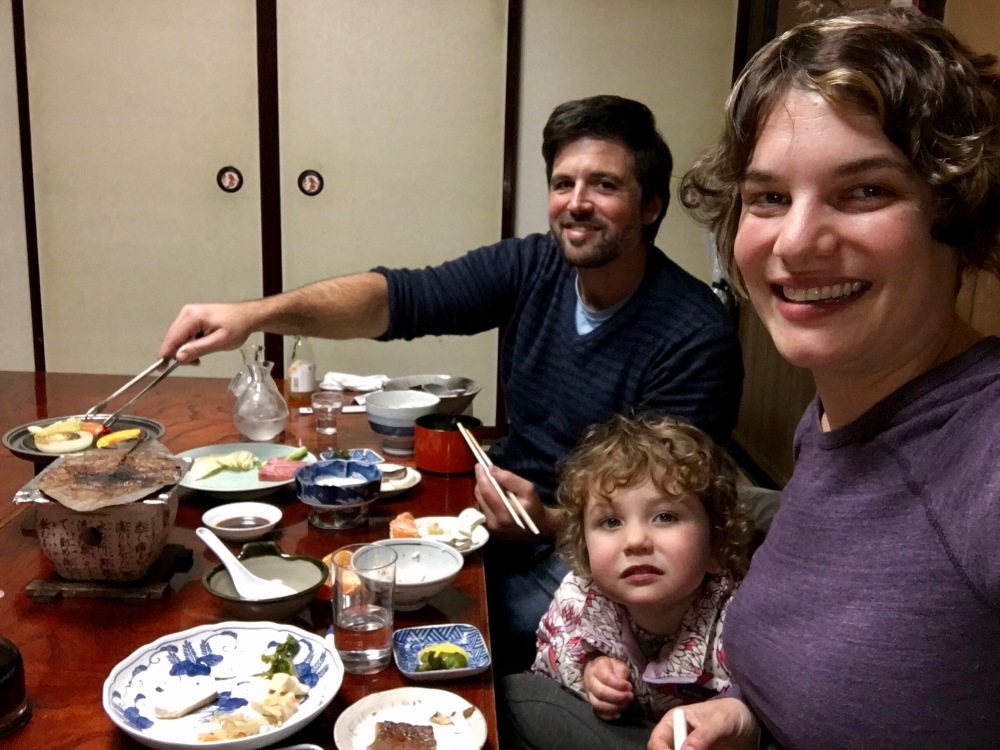 These tables with the grills in the middle were very cool. 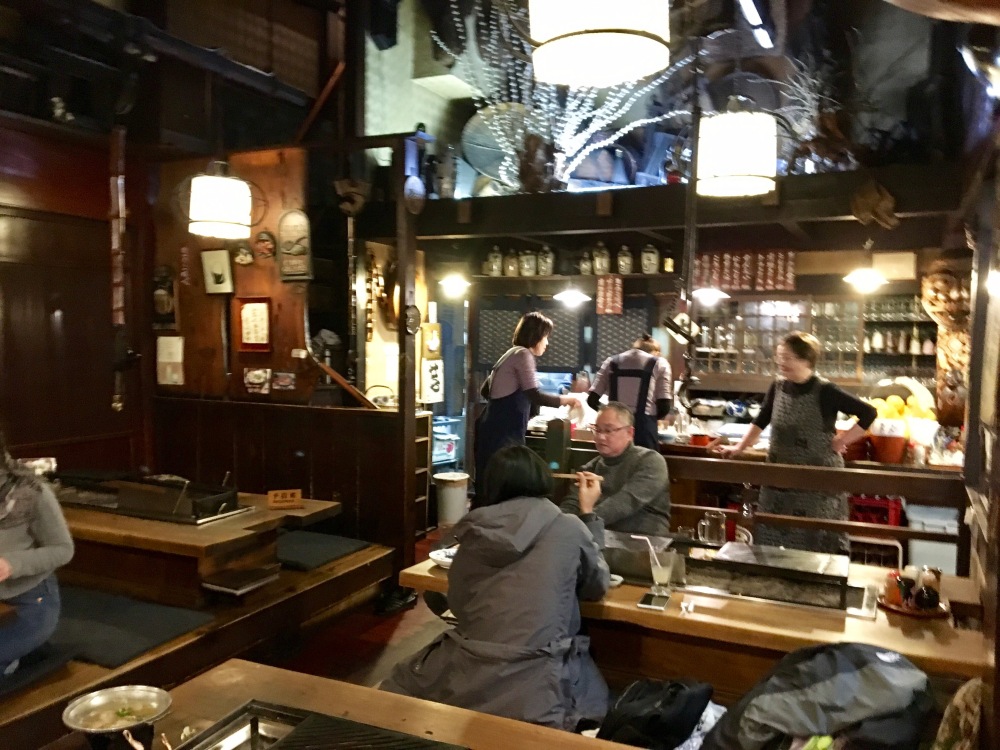 The hoba miso cookers are pretty photogenic. I’d buy one, but I really don’t think this is a dish I can see us recreating at home.

After dinner, we asked the restaurant to call us a cab. It’s COLD out there, and it was sleeting! No thank you.

This is what happens when you tell a toddler it’s time to change her band-aid. The scraped part is already looking much better, thankfully. I feel so terrible.

This airbnb in Takayama is NICE. The building is brand new and the apartment has two bedrooms! One of the rooms actually has  two sleeping nooks. One is accessed by a little house-shaped hole, and the other you have to climb a shelf to get into. Ami immediately asked to sleep in the bottom one.

And, the proprietor somehow knew that Logan’s birthday is this week, so she left him cakes from a local bakery! Wasn’t that thoughtful? Plus the beds are nice, the water is hot, and the carpet is plush. A+, would stay again.

Good night! Tomorrow, we try not to freeze while sightseeing. Wish us luck.