OMG, you guys. I guess we’ve been pushing our toddler hard, because today she woke up just before 11. My toddler is a teenager?

Well, she’s at least a tween, if that look on her face is any indication.

We gathered ourselves and left our apartment, stroller in tow, to find some lunch.

On the way there, we got distracted by a small market, with stalls selling small housewares, little snacks, and… make your own cotton candy.

​​
So, of course, we had to get one for Ami. She did really well crafting the thing, and then did even better breaking it down.

Heartened, and hopped up on purple sugary treats, we kept on towards lunch.

Luckily, we were able to get into a place I’d wanted to try! Izasa is widely known for its kakinohazushi, which is sushi wrapped in a persimmon leaf (you can see a couple of pieces of it in the lower left of Logan’s tray). Their prices are very reasonable, too – that whole plate above is 2400 yen, or about $21.50. The food was wonderful, too!

Ami tried a bit of this and that, but mostly ate snacks we’d brought. These were just a bit too unfamiliar for a toddler. She did get a kick out of sitting on the tatami mats to eat, though.

Happily fed, we plowed on towards Nara Park. Not only is Nara Park home to some amazing sights, it is also home to a giant herd of deer. These deer are revered as messengers from the gods and are treated quite well. There are a bunch of stands around the park where you can buy rice crackers made specifically to feed them!

Deer crackers procured, we were off!

(Logan had to do this with the deer crackers, guys – it’s a tradition now. Here he is with a giraffe in Nairobi several years ago.) 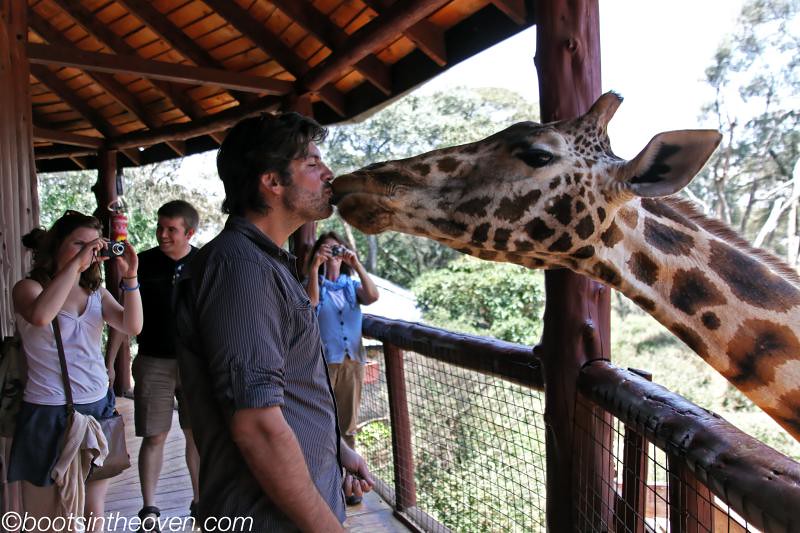 Unlike some of the kids (and adults!) we saw, Ami was confident around the deer. We heard lots of people squealing and screaming, because the deer do get awfully aggressive if they think you are holding out on them!

And when I say aggressive…

I hope Logan doesn’t mind me sharing this video, but I think it is HILARIOUS. He was trying to take a video of Ami feeding some deer, but just a few seconds in a deer started nibbling his back pockets thinking he had crackers stashed away. He didn’t realize he kept filming through the whole thing! Sound is worth it on this one.

​​
There are a ton of small shops in Nara Park selling all sorts of deer-related tourist gack. So, somehow, the toddler ended up with a deer purse, a deer charm on a string, and a deer hat. Don’t look at ME.

The main highlight in the park is Todai-ji, a temple complex that houses the largest wooden structure in the world. Daibutstu-den hall was built in 1709 on the site of a previous, somehow LARGER structure, and unsurprisingly is bristling with NO SMOKING signs.

Inside Daibutsu-den is the Daibutsu, a massive cast-bronze statue of Buddha that is one of the largest bronze sculptures in the world.

Pictures don’t do it justice. It is HUGE. It is over 50 feet tall.

Around the side of the Buddha is a column with a smallish hole cut through it. Apparently (or at least according to our guidebook), if you can crawl through this hole you are assured of enlightenment. Most of the people trying were smal children, but we did see a few adults squirm their way through! The hole is the size of the bronze buddha’s nostril.

Ami made it! Enlightenment, here we come!

By the time we left Todai-ji it was getting kind of late. Time for a purple sweet potato ice cream!

We got to see a HUGE bell, apparently one of the three most important in Japan.

And Logan and Ami fed some more deer.

Then, we had to skedaddle into town, because Ami was down to her last three diapers. We checked in three separate drugstores, only to learn that apparently every child Ami’s size in central Nara is in pull-ups. Eventually, we found some nice-looking diapers that are probably going to be only a little bit too small on her. I am really glad now that we decided at the last minute to bring two packs of the diapers she uses at home!

After all of this searching, we were all pretty hungry and ready for dinner. Unfortunately, we didn’t realize that on a Saturday in Nara finding a good place to eat would be easier said than done! Literally, the first three places we walked into said they were fully booked. Finally, we found a place that would let us stand and wait until they had a table available! Unfortunately, the table was a two-top, so I ate my meal with Ami in my lap. Toddler snuggles.

Here’s how Logan was feeling after our search for dinner.

I think we cheered him up, though.

La Terrasse had beer, and neat garlic bread, and a delicious steak, and decent pizza. Ami enjoyed the margherita pizza, while we tried out the hoses special – which turned out to be covered in basil sauce, bamboo shots, and tiny shrimp. (!?!!!???)

Tomorrow, it’s supposed to be kind of rainy here, so I’m not sure what the day will look like. I know we will have fun, though!