I’m sort of putting together a post about flying with Babaloo, who’s now been on two airplane trips! That will have to come another day, though, since right now I’d like to babble a little more about food.

Feeding is continuing to go well. Two months (and a smidge) into experimentation with solids, and we are truckin’ along like little champs. Mostly. Sadly, these amazing faces Babaloo used to make when trying something unfamiliar are pretty much gone. 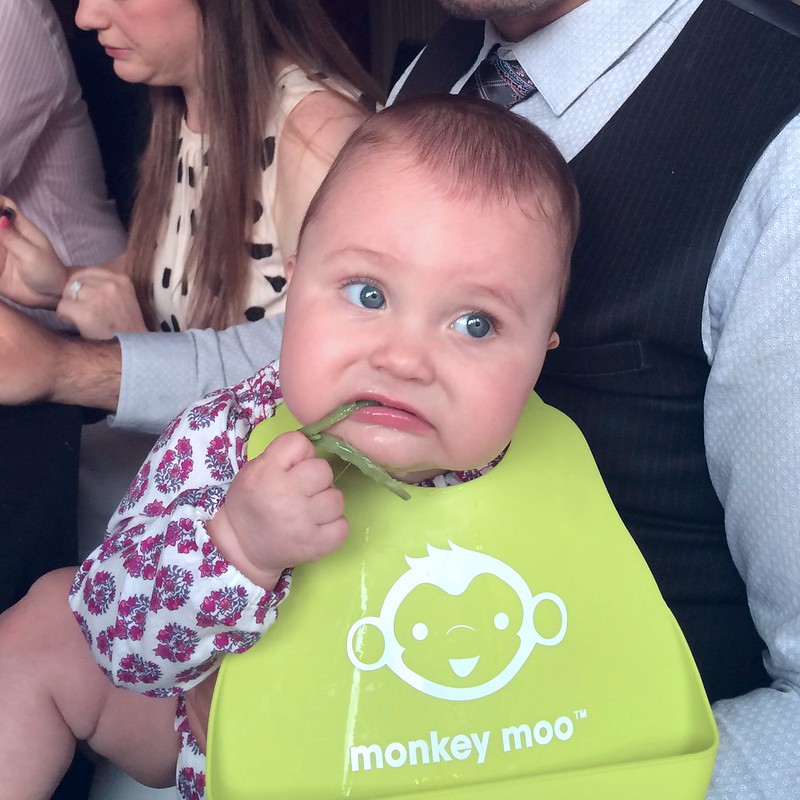 We’ve learned a few things, too. One: we got a mat for the table. Turns out, Babaloo likes to bang her hand on the table while she eats, like a tiny fired-up dictator. This is sort of cute, but splashy, when she’s holding something like a wedge of ripe peach or a fistful of quinoa, but it’s less cute when she’s holding a spoon or her silicone feeder. Our brand-new dining room table now sports a little constellation of tiny dents from her banging. A mat from ezpz now protects the table, and bonus! has dividers to put foods in. It’ll figure prominently in these pictures, since we’ve been using it for every home meal.

Other gear we’ve gotten: the Monkey Moo bib you see above, which Granna found online. It’s soft, easy-clean silicone, it has a pocket to catch food (Babaloo loves to fish in it for leftovers after she’s been eating for a while), and it rolls up easily for stashing in the diaper bag. Great for eating at restaurants, or when you want to try to preserve an outfit.

Babaloo’s meals are definitely larger than they were when I wrote my last post back in May. It’s been a slow and continuing progression. For a while, we would offer her one item at each meal; a wedge of avocado, a slice of peach, a rice rusk. Then we’d offer two things. Now, most meals, she gets a full spread of whatever we’re eating. Isn’t she adorable sitting at the table with us? 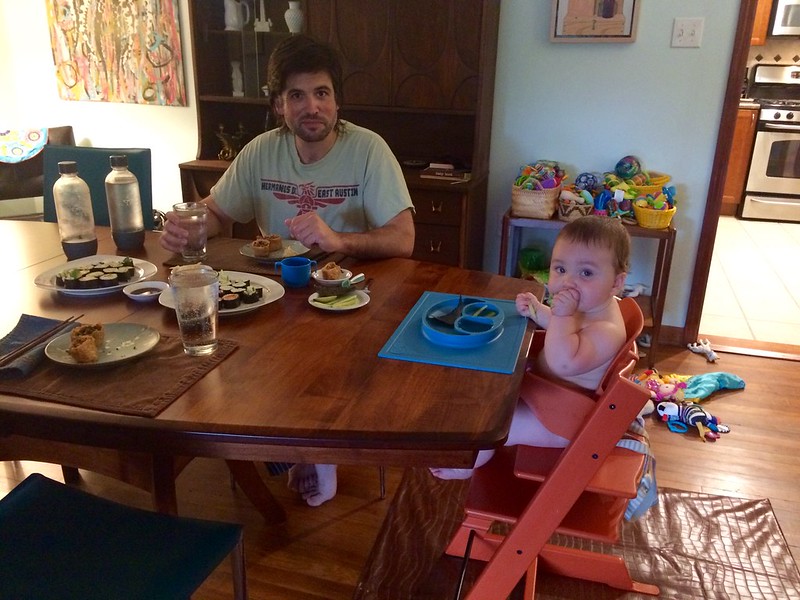 She’s still not eating a lot, but at this point she’s usually game to try whatever we put in front of her. Sometimes she’ll just grab an item, mash it on the table a few times, and drop it to the floor. We then pick it up and present it to her again, at which point sometimes she’ll eat it. And sometimes not. 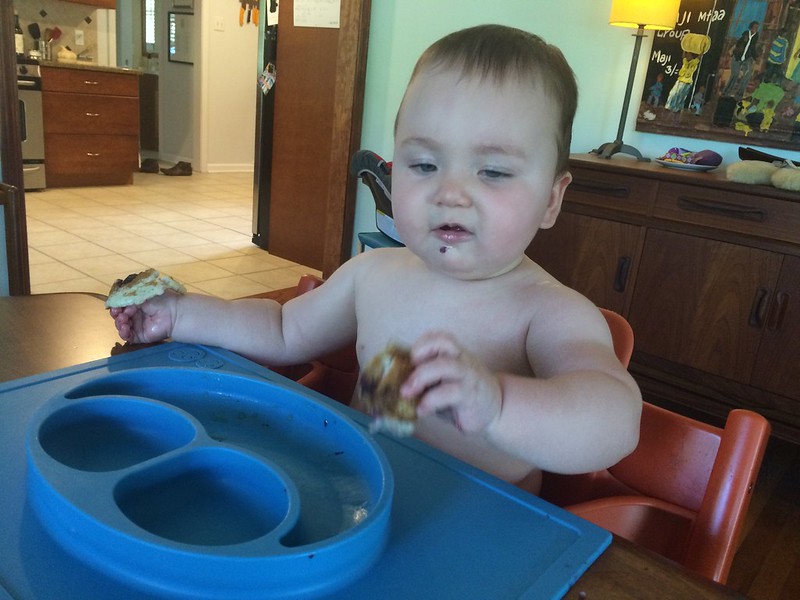 (Surprisingly, Dada’s blueberry pancakes with a dab of maple syrup weren’t a big hit. They did mash on the table well, though.)

Breakfast is often fruit served with either full-fat Greek yogurt or iron-fortified baby oatmeal. I caved and bought baby cereal because, with Babaloo still not eating much, I’m concerned about her iron intake. Apparently infants are supposed to get 11 milligrams of iron a DAY. WHAT? HOW? Anyway, a full serving of the baby oatmeal provides just under half of that. The vitamin C in the fruit helps with absorption. We’ll come back to yogurt later, since she’s clearly a fan. 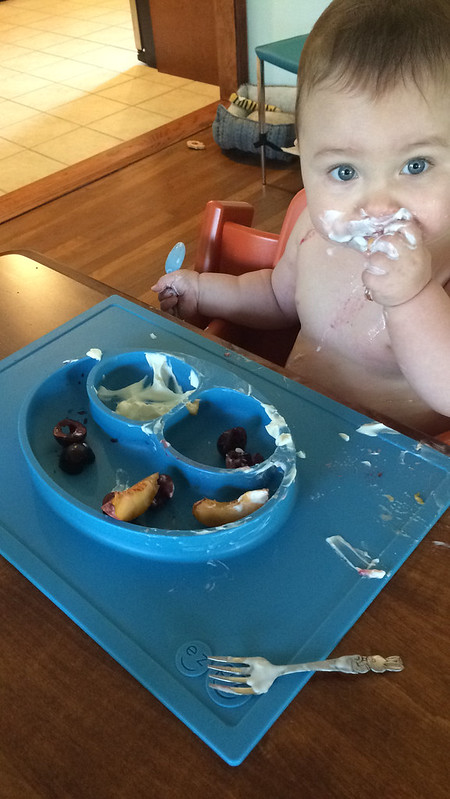 For the last few days, we’ve dipped the fruit in the baby oatmeal before presenting it to her, and it seems like this gets a bit more of the cereal into her actual mouth. Pre-loaded spoons are less successful, since she just turns them upside-down or jabs a finger at whatever’s in the bowl. We still have the most luck with the num-num dips, because without a bowl things don’t fall off them as easily.

She’ll also sometimes suck more difficult foods (rillettes!) off of toasted bread, so yesterday I broke up a rice cracker and dipped it in hummus for her to see if she’d try to use the cracker as a utensil. Not really. 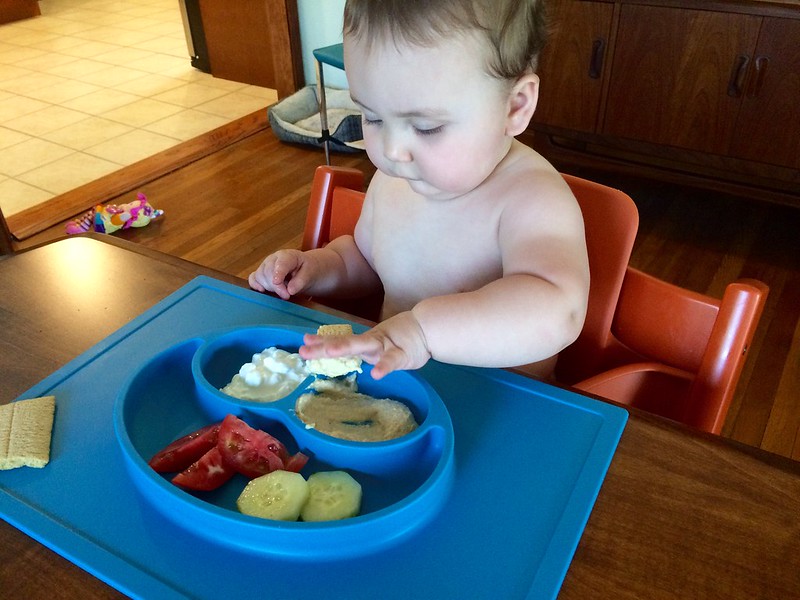 She liked these scrambled eggs and thin-sliced cucumber strips. The nori was a little more challenging. 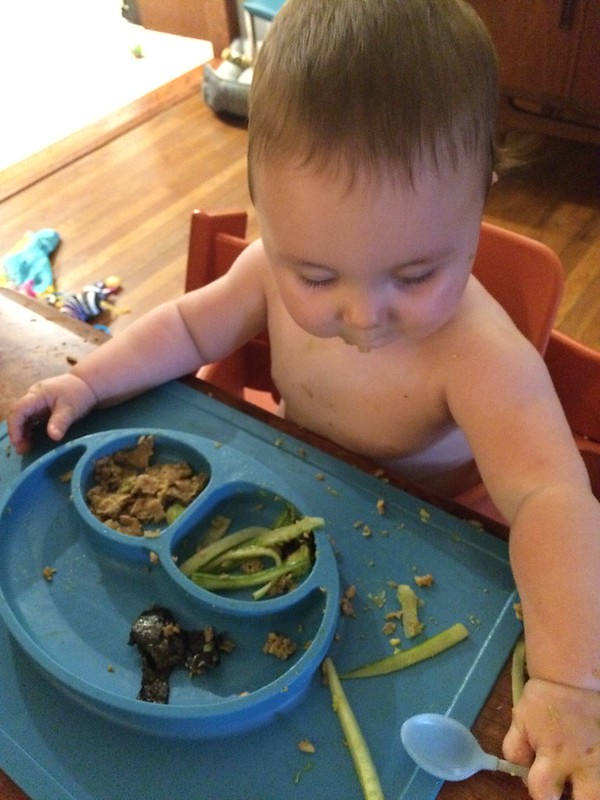 Bacon was hard for her to eat, but she did surprisingly well for a girl with two teeth! She sucked on it for a while, and when it fell apart she ate a good bit of it. Avocado is a favorite, and so easy for her to eat (and for us to prepare). She also really likes apple slices. We’ve found the best way to serve them to her is to microwave them for 30 seconds or so, until they soften, and then let them cool. 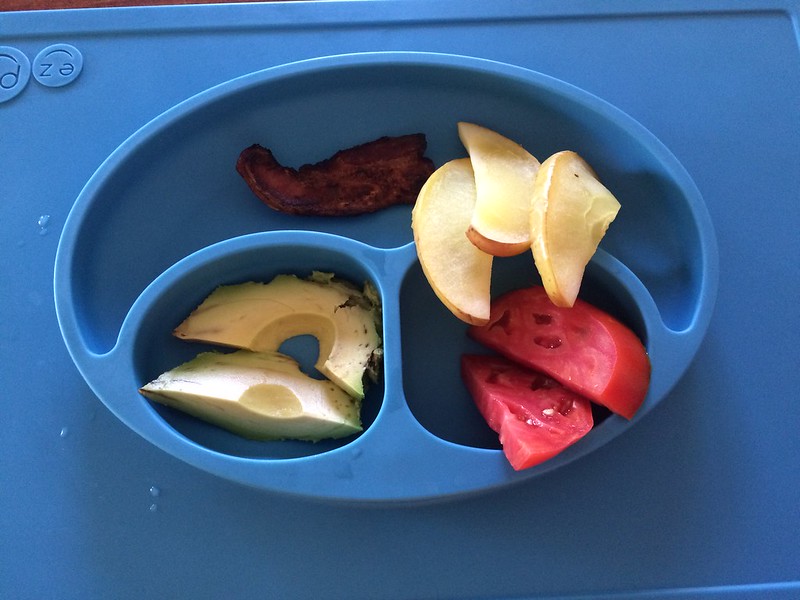 Babaloo has now had several of the allergenic foods with no reaction. She’s tried strawberries a few times, melons (which I was sensitive to as a child), crab, and peanuts. I’ve given her a smear of peanut butter on toast, and we also often give her Bamba peanut snacks. They’re a great way to introduce peanuts, as they’re the perfect size for a little baby fist, and there was a study recently that theorized that the reason peanut allergies are less common in Israel is that most babies get these snacks starting early.

I think the only thing left to be concerned about is shrimp! I have noticed that after eating a lot of raw tomato, she’ll spit up more than usual, but I really think that has more to do with acidity than allergy. We shall see.

It’s been super fun taking her to restaurants, too. While we were in Chicago recently we met some old friends for Korean food. Amity LOVED the pa-jun and the jap-chae! Noodles of all kinds are SUPER popular in the baby set. 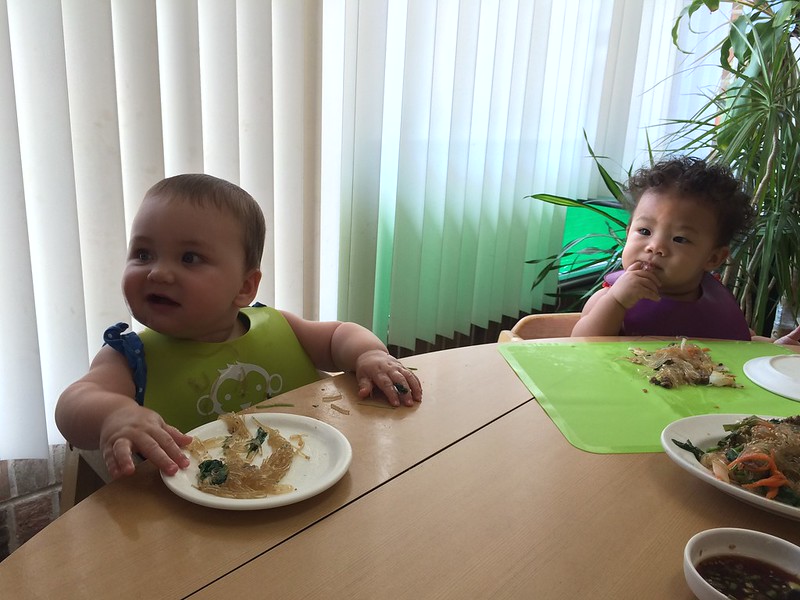 All in all, we’re doing well, at least food-wise. Sleep is a whole other battle!

Other lessons learned after two months of feeding Babaloo:

Having a splash-mat has been really nice! But I wish we’d bought one we could put in in the washing machine every now and then. I’ve noticed that less food is hitting the splash mat recently, too! Though there’s still a lot on the chair after each meal.

Feeding her in a diaper is easiest when we’re at home. She gets sink-baths after breakfast and lunch, and a full bath after dinner, which has become part of her bedtime routine, along with a full-body coconut oil rubdown to prevent dry skin.

We were going through too many paper towels for my liking, so I bought reusable Skoy cloths. They do a good job cleaning the table and wiping down the high chair and splash mat, and can be thrown in the washing machine or disinfected in the microwave.

I wonder what her eating will look like at 10 months! Though progress has really felt slow, looking back I can see how much better she’s doing and how much more she’s eating. It’s incredible to watch!